Based on a conversation in another post regarding Laser Disks, I stopped in and grabbed a bunch of the Anime related ones. I am not a huge Anime fan by any stretch, but I thought friends might be interested in them, and the art work on them is pretty darn cool if I get stuck with them. One thing that struck me about having so many in one bunch was the weight of them though – these together were so heavy that by the time I got home, the bag was stretched and deformed.

The first thing I am going to post a picture of though (sectioned off as to not intrude on the LD-ness of this post), is this original 70s Japanese Starwars record I got my hands on. Total fluke to find this one! It was mixed in with the Anime LDs and was priced low. 😮 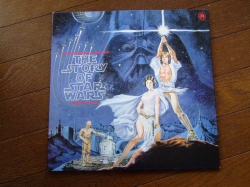 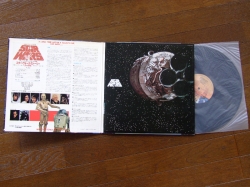 Enough of the non-LD related, now moving onto the LDs. As I bought the LDs you see bellow purely based on if the LD had cool cover art (from my subjective viewpoint of course), I’m really not sure what I have here, so if there is anything worth while let me know – looking at you Ji-L87. 😉 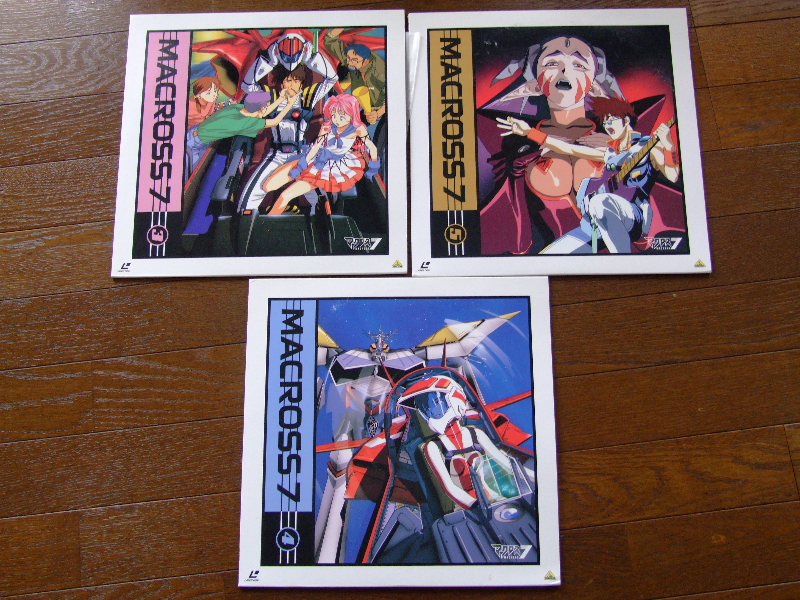 These Evangelion LDs pictured bellow are actually still sealed. This may be an indicator of just how crap they are, or just how short lived the format was – either way, I’m sure being sealed will appeal to guys out there collecting these sort of things. 😀 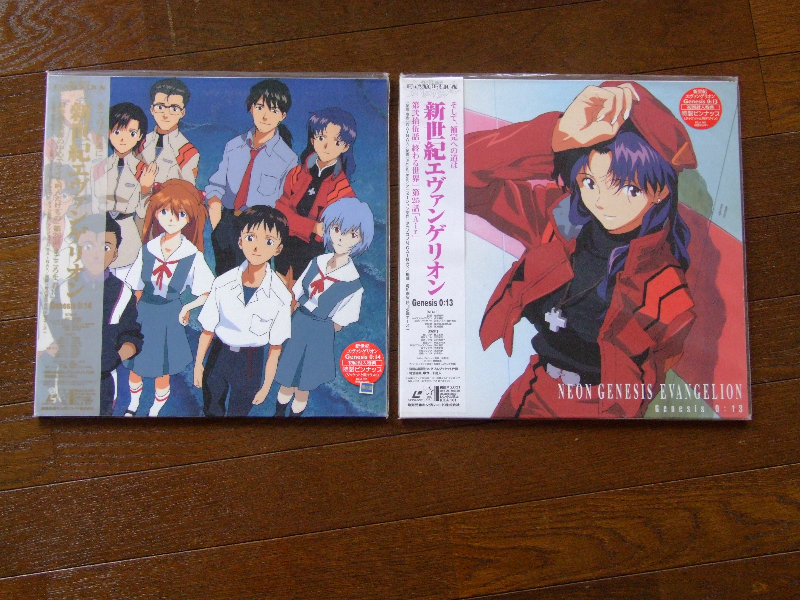 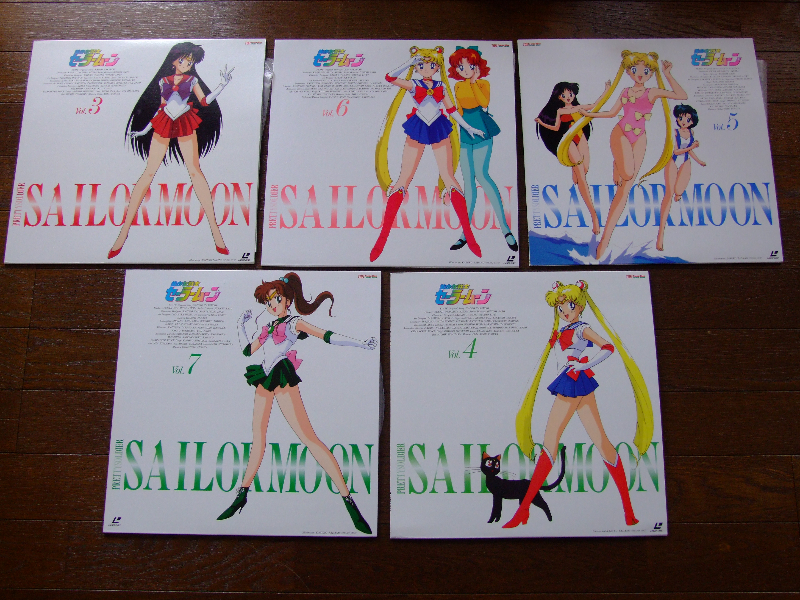 I really like the artwork of the this one bellow (first picture showing the front cover, and the second showing the inside). No country does Robots like Japan! 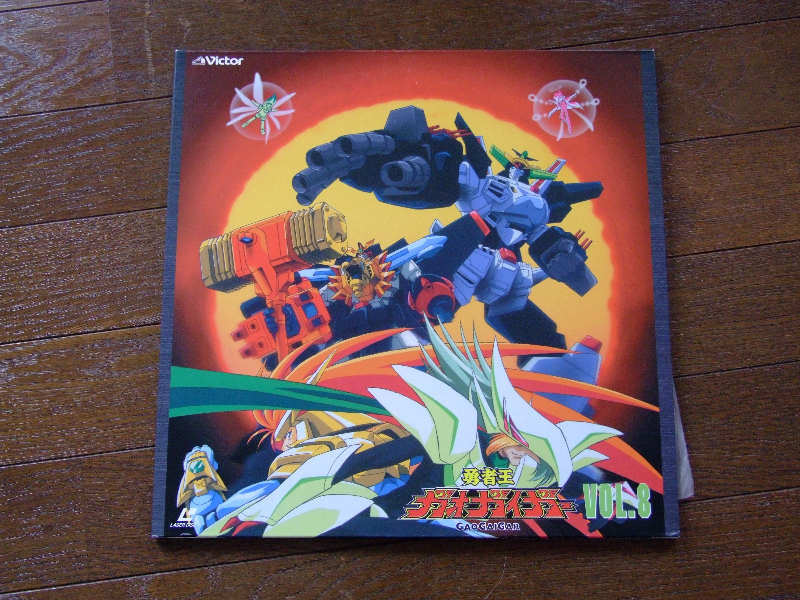 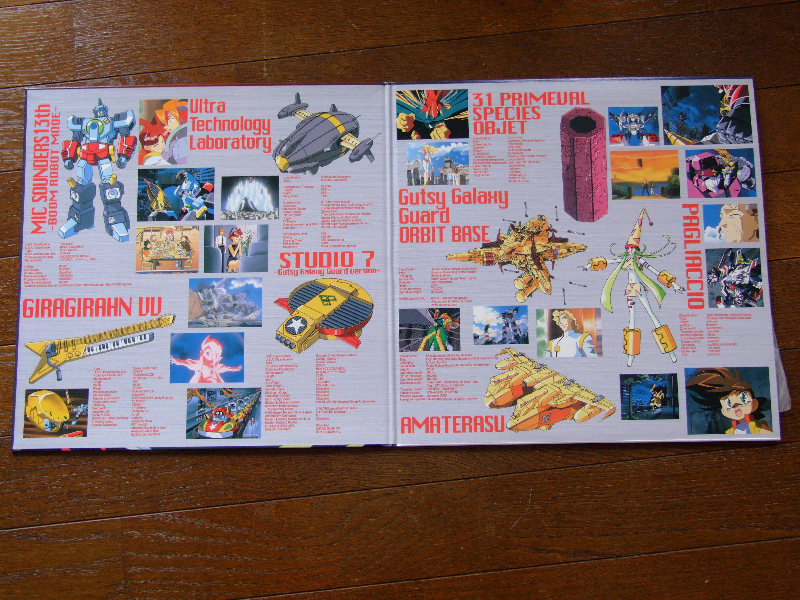 Slayers seem to have been licensed to pretty much every format. Definitely make for good LD covers though. 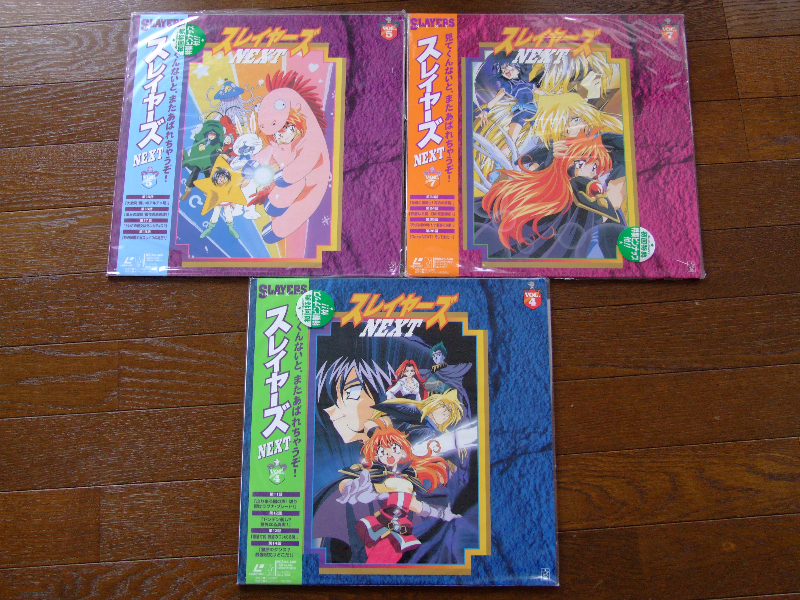 The one pictured in the bottom right hand corner bellow is pretty unique (as far as I know anyway). It’s a rental version, and the disk is actually gold. This is the first time I have seen a gold LD, but I have to admit that doesn’t mean much, as I owned only two LDs before buying this lot. 😀 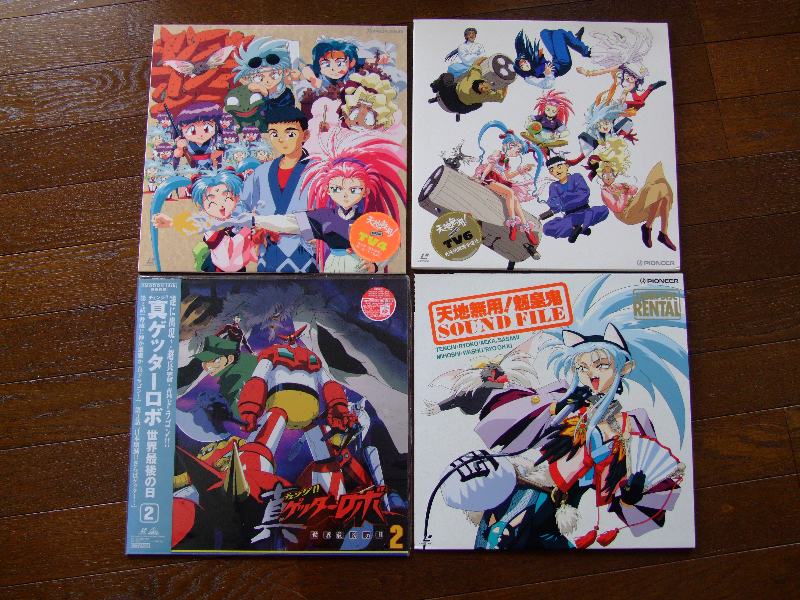 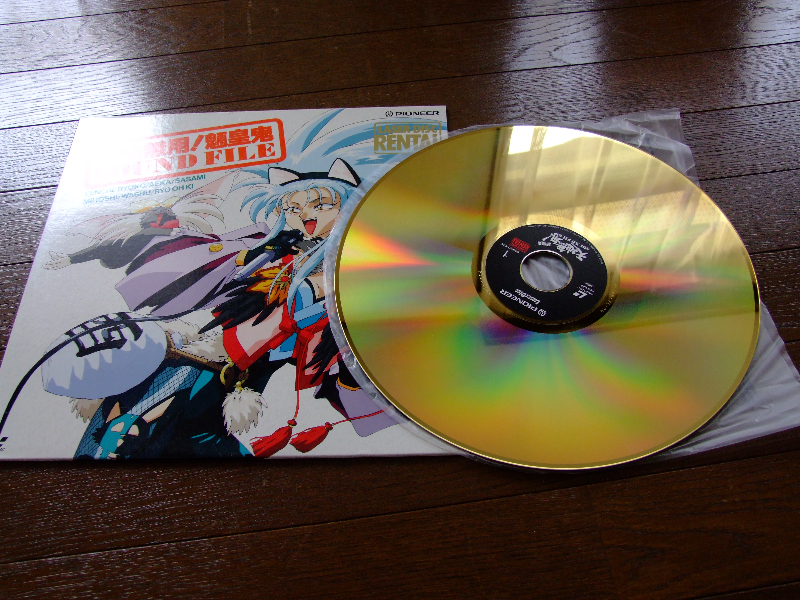 Well, I think I managed to get all the pictures up. Like I said, I know nothing about these from a collectors standpoint, so any info. would be great. 🙂

Mandai is a pretty big chain of stores here in Japan. They specialise in almost everything retro, used, or quirky in some way. The only trouble with these stores is that the prices vary dramatically, and to get a good deal it can be rare. Still, I have bought some very nice items from this place in the past, but on this trip it was not to be.

It’s always a good sign of an interesting store when there is a giant robot out the front right? 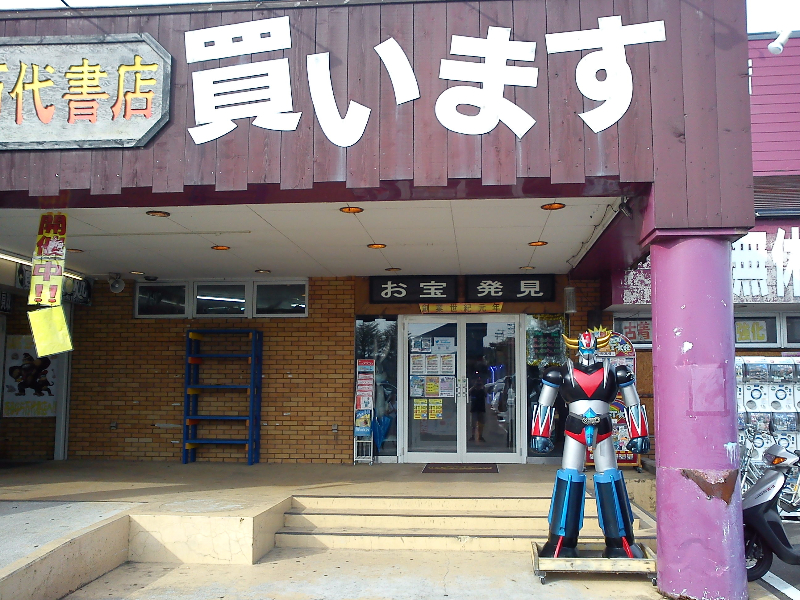 And it’s even better (as a sign of a place I want to go into) when the giant robot is sporting a game controller as a belt buckle. 😀 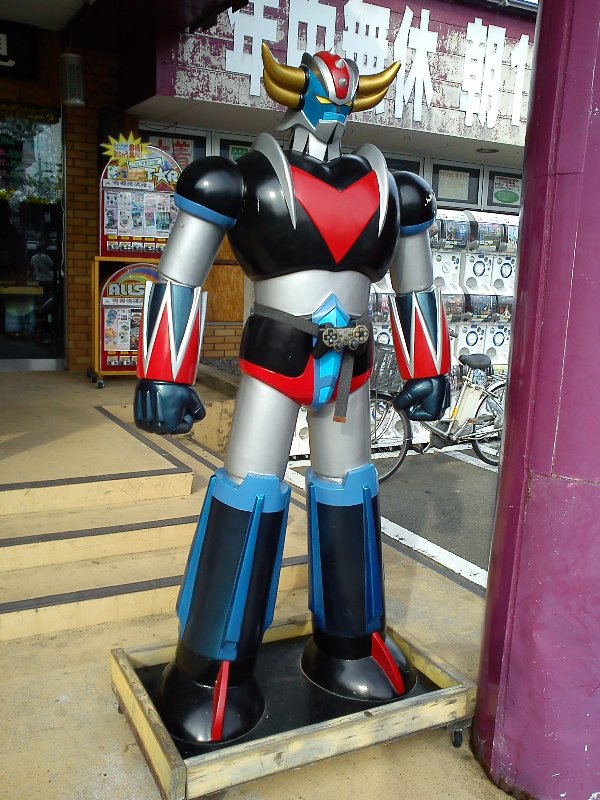 The range this place carries is nothing short of amazing, but the stock doesn’t seem to rotate all that often unfortunately – mainly due to the prices. Don’t get me wrong, the prices are quite fair on average, but they’re just not the usual jaw-droppingly cheap that a game hoarder becomes accustomed to here in Japan.

This item bellow is something I hadn’t seen before. Maybe Sean from the Famicom blog can shed some more light on it. It is a Karaoke unit for the Famicom of all things. I would love to hear the 8-bit renditions of 80s J-Pop that would come with it! I was very tempted to pick this up, and in all honesty I might go back and grab it if anyone can fill me in on it. 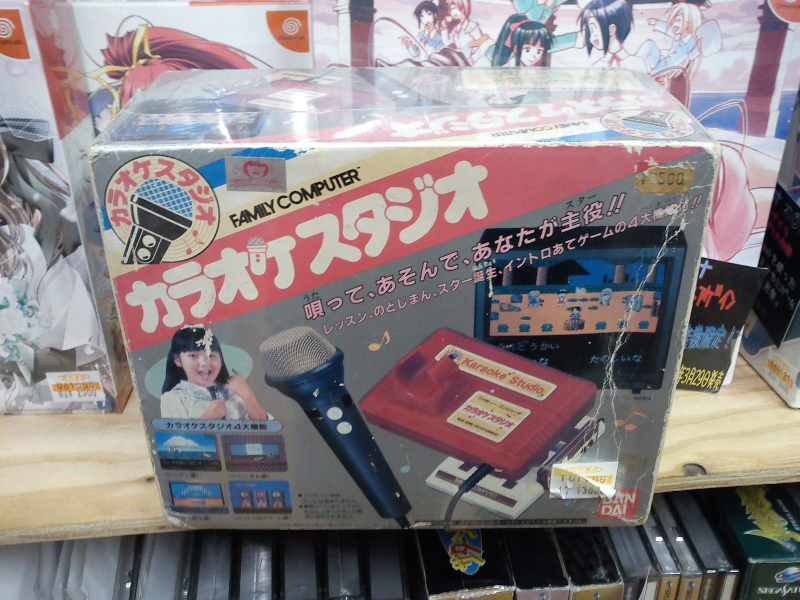 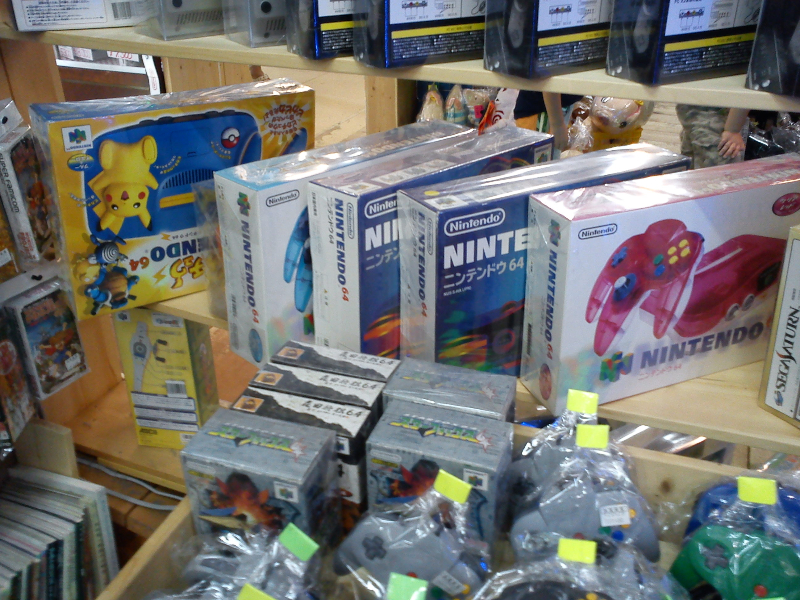 There is so much here that getting everything in a single shot is pretty much impossible. Bellow we have a few pics of the Super Famicom sections. 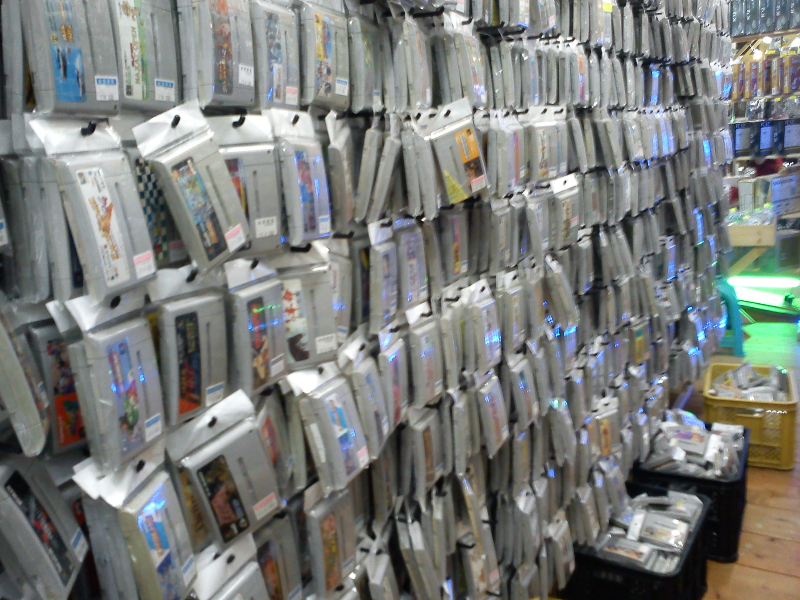 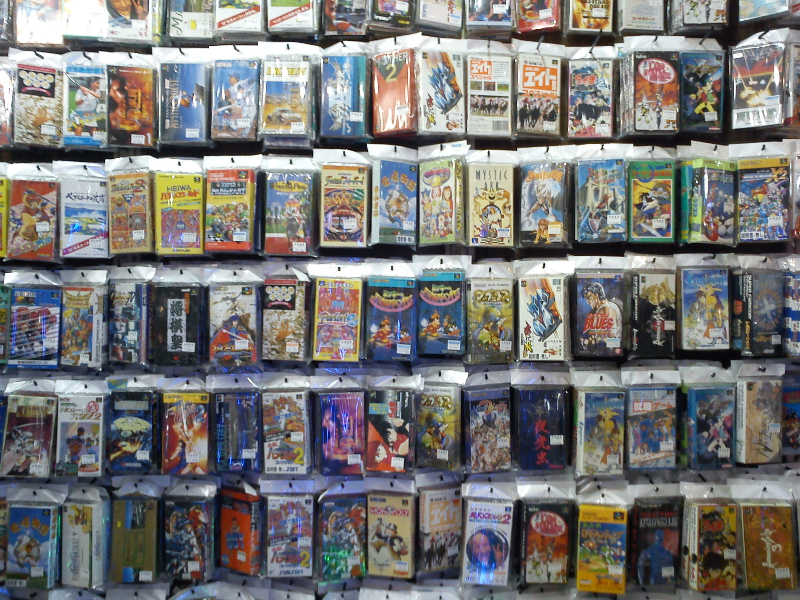 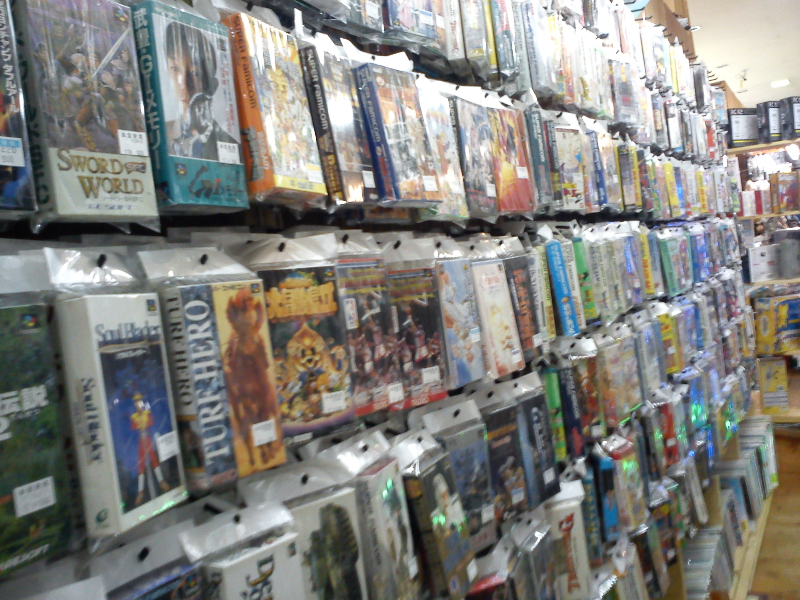 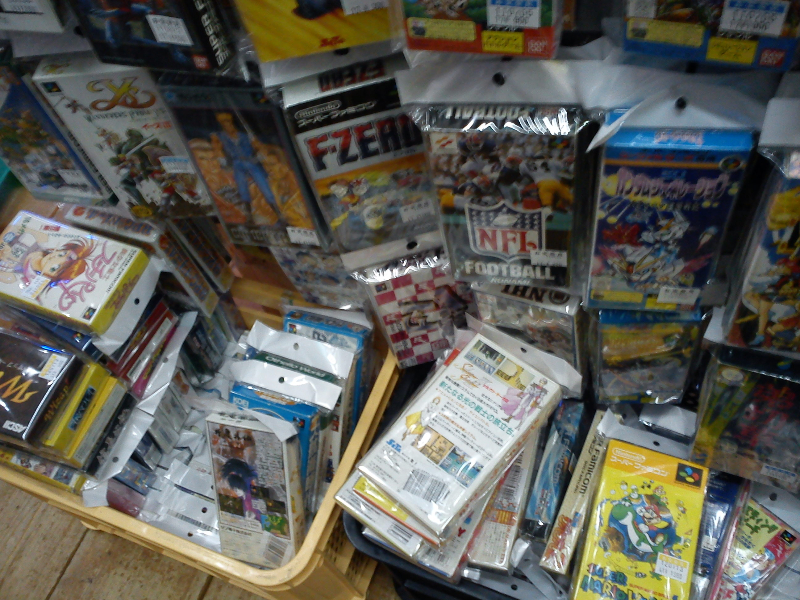 As you can probable tell this far into the post, this particular shop is large, very large, but the pictures really do not give the size away. Even when there in person, the front door of the shop opens up to almost a Tardis like experience. The first thing you notice is a massive Pachinko/Pachislo parlour, then the place opens out into a myriad a colours and sounds in an almost seizure inducing mess.

Some Saturn,Dreamcast, NeoGeo, and VirtualBoy stuff. 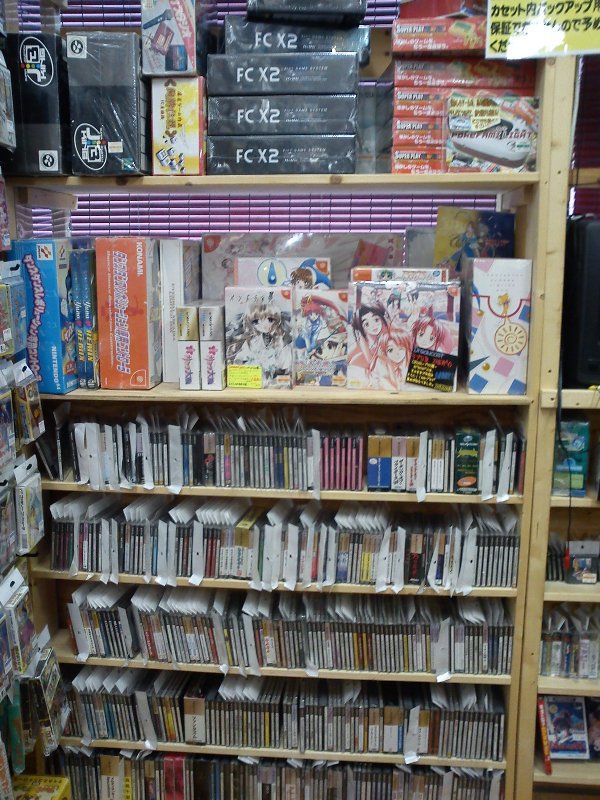 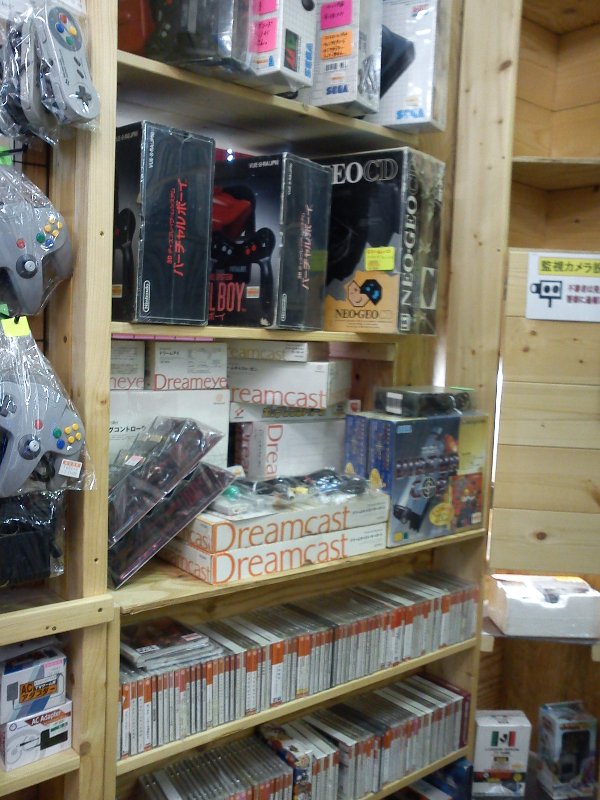 Here we have one of the isles. This one has a fair bit of the N64 stuff, and some more Super Famicom carts. 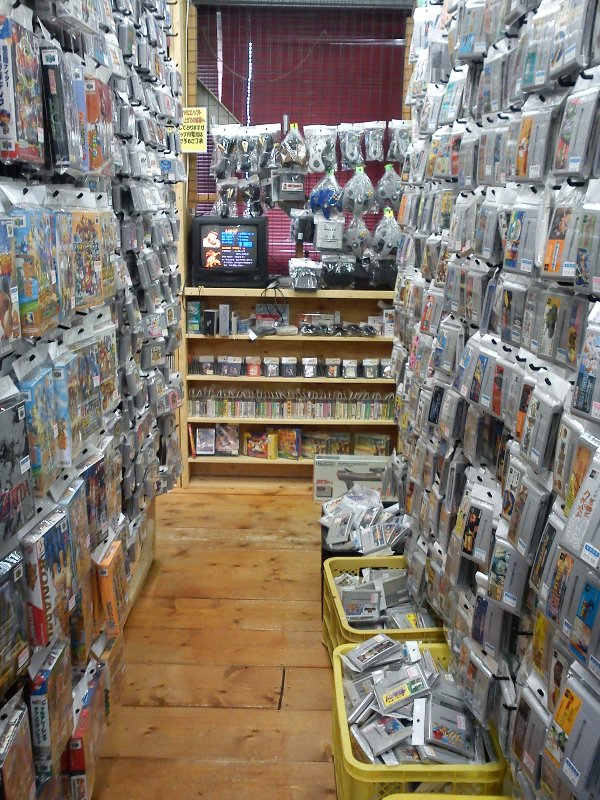 Sorry for the blurry picture on this one guys. As I have mentioned before, taking pictures in Japanese stores isn’t looked on too kindly, so I had to rush around to get these pictures. Unfortunately this means that the Famicom carts ended up being a bit on the blurry side. 🙁 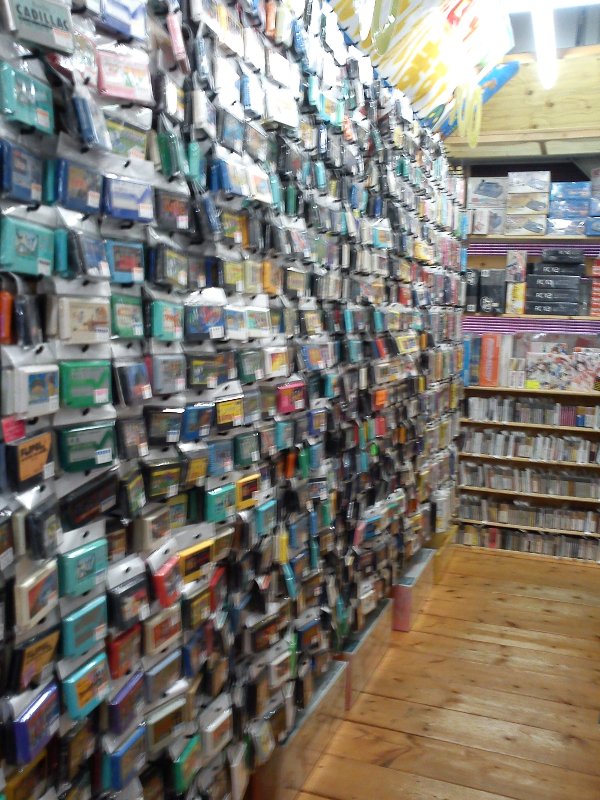 OK enough of the games for a second…. Like I mentioned above, this place is massive, and stocks so many different things that you will never get through the lot in one go – that is not an exaggeration! I usually get into complete meltdown after about 50% exploration. Bellow I have taken some random pictures of stuff that I thought would suit fellow geeks. 😀

A life sized Yoda! Yes, I understand that Yoda is not real, but if he were, this is how big he’d be. 😀 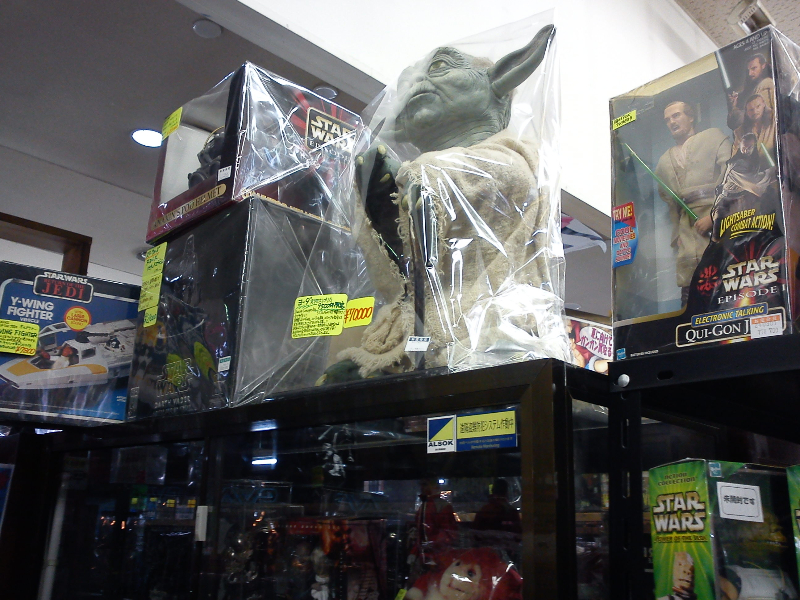 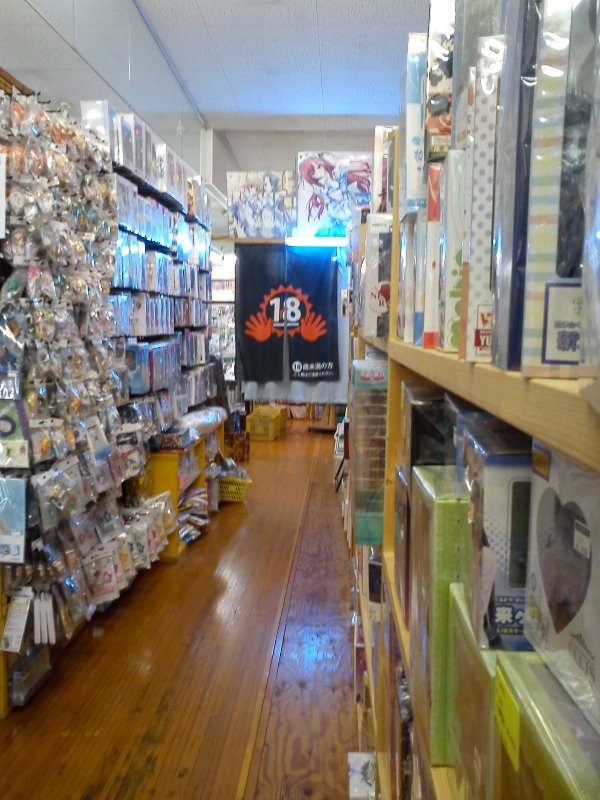 Yes, Godzilla is in fact smaller than DarthVader – always knew this was the case. 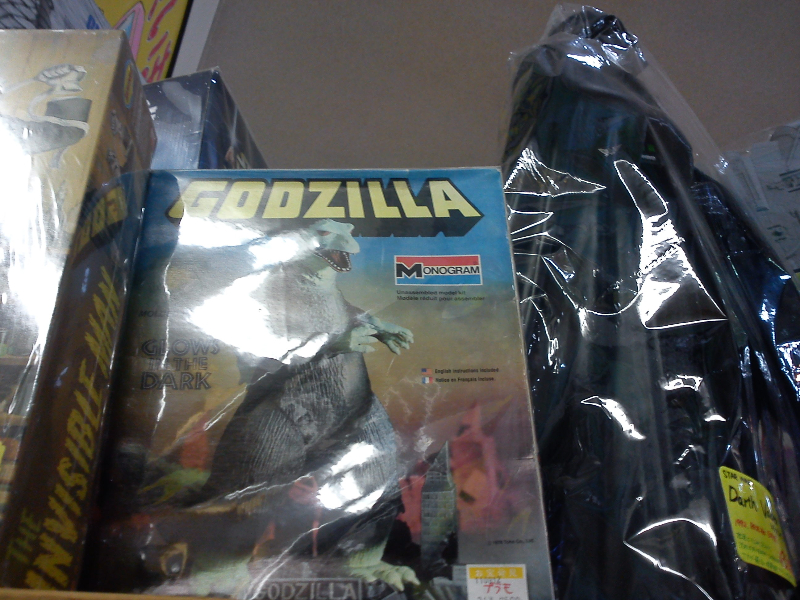 I was not expecting to find Coneheads toys!

And finally we have the Megadrive section on the left and game books/tutorial on the right. The picture bellow that is an area of the PS2 section that would fit into the frame. I kid you not, that would be less than 20% of what’s there for PS2! 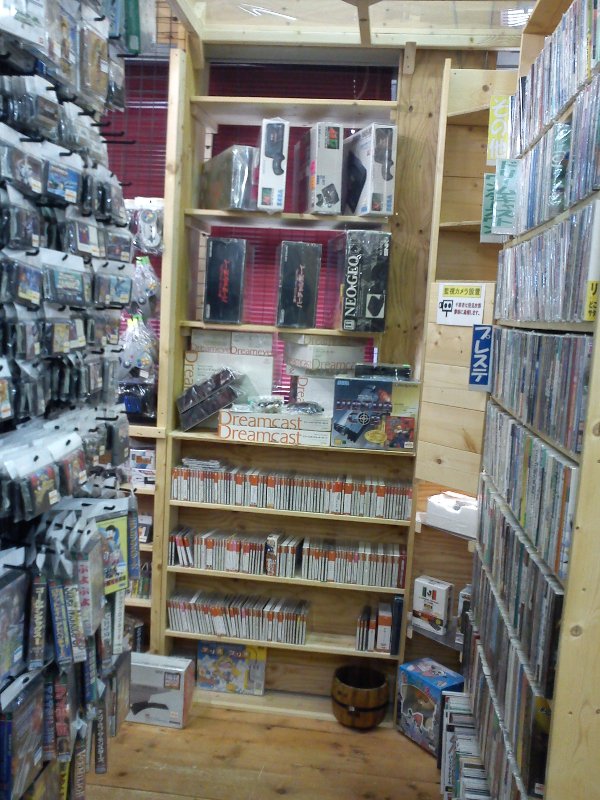 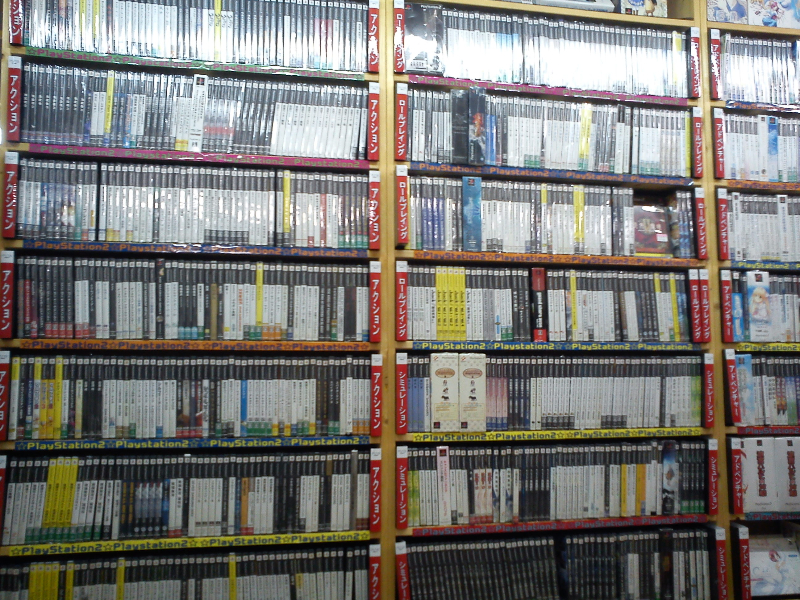 Just looking through these pictures makes me realise just how much game gear I have missed! I missed the GameCube, Handhelds, any current Gen machines and games, plus so many other interesting sections of the store. This place is amazing to walk through for any serious Otaku, but I would definitely recommend going on a weekday if possible – people just add to the claustrophobic feeling of the place.